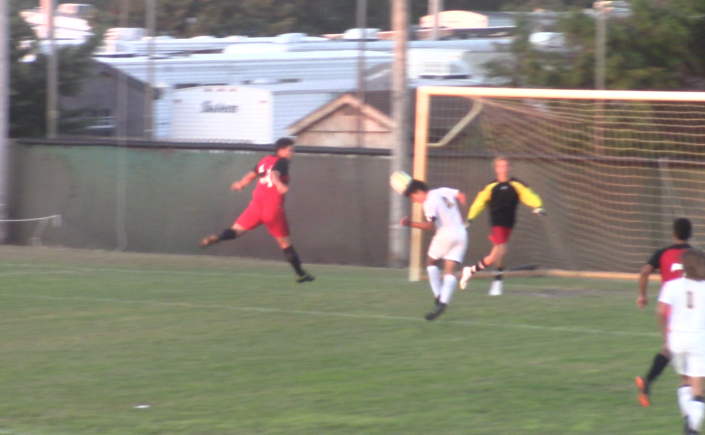 On Wednesday, September 26th, Manteo traveled south on Highway 12 to rematch the Cape Hatteras Hurricanes. The long-time rivals met up in the previous week and while the 6-0 scoreline in favor of the Redskins does not suggest it, it was a hard-fought and physical game that left both teams short a player due to red cards.

Playing on Hatteras Island is always a difficult task as the home side always steps up to defend their home turf. The Redskins were ready for a difficult game but I suspect that no one anticipated the wildly entertaining game that would ensue upon the kick-off.

From the start, Manteo focused on possession play and off the ball movement but their first touch was poor in the first five minutes. A plethora of throw-ins marred the first five to ten minutes of play and neither side could keep the ball in bounds. As Manteo settled in and found their touch, their next hurdle was figuring out how to get into the space behind the Hatteras backline. The Redskins controlled the ball well through the midfield and often switching the ball along the backline, but they struggled to work the ball into the final attacking third.

Midway through the first half, Manteo’s left-back, Oscar Rivera decided that making some overlapping runs along the left flank would allow for penetration through the backline. After a couple of runs that led to dangerous crosses in the box, Rivera decided to take it all the way to goal for his own shot.

The play began with left-winger, Aldo Herrera, dropping the ball back to Rivera. Rivera used his forward momentum on the ball to burst past the midfield defender and then split two more defenders to push the ball forward into the box. He initially sent a cross into the box that was blocked and deflected out by the Hurricane’s center-back. Rivera made sure he was first to the ball in the box, made a cut away from the defender and then unleashed a sharp near-post shot with his left foot that stung the back of the net.

Shortly after Manteo took a 1-0 lead, Hatteras equalized with a free-kick from their number ten. A free-kick was awarded for the Hurricanes just outside the 18-yard box. The referee walked over and point to the spot of the foul but did not stop play to walk off ten-yards for the wall. Manteo seemed to think they had plenty of time to set their wall. Manteo’s keeper, Ortega,  was hugging the near post, directing the wall as the home side number ten took his shot at a wide-open goal and then jogged back to midfield for the kick-off. Manteo was stunned but had no one to blame but themselves.

The pace of the game was elevated after the early equalizer. Manteo began to really dominate the possession through the midfield and started finding diagonal passes through the Hurricane’s backline but they could not find a finishing shot or header.

Shortly after Hatteras equalized, they took the lead with a penalty kick. The Hurricane’s number ten made a run to deep down the left flank, drawing the ball just inside the box as the recovering Manteo defender stumbled into him as he made a cut towards the goal. Number ten went to ground and earned a penalty kick. The resulting penalty was nearly saved by the outstretched arm of Ortega, but the ball slid just under his fingertips, giving Hatteras a 2-1 lead.

Manteo did not panic or change their style of play. They continued to use combination play through the midfield to earn crosses and shots in the final third. Their style of play would pay off in the remaining two minutes of the first half.

Herrera received the ball down the left flank and dropped it to the now left-back, Alex Tovar. Tovar played a nice diagonal ball to Rivera, who was filling in the striker role for the moment. Rivera squared the ball back over to Herrera as he made his run down the left-wing. Herrera beat his defender and send a beautiful cross to the top of the six-yard box. Calvio made a well-timed run onto the ball and cleanly and confidently headed the ball into the side netting to equalize before the half.

The second half began with Manteo controlling much of the ball through the midfield but they still struggled to penetrate the stout Hatteras backline, particularly through their left-back. Manteo too often settled for deep shots instead of penetrating the space behind the high line. Their finishing touch was absent for much of the second half.

While Hatteras never saw great looks at goal in the second half, their senior winger, Jose, made the most of one of his few attempts at goal. After winning a Manteo goal kick in the middle of the field, a high lofty ball was sent over to Jose on the left-wing. He chested the ball down and then head it over Gregory into space 30 yards out from goal. With the ball still bouncing, the Hatteras attacker struck the ball with the outside of his right foot. The shot targeted the far post. At first, it sailed up as it curved back inside towards the far post and then it dropped out of the sky, clanking off the upper-ninety far post and into the back of the net. It was a shot that would play on repeat even in the Premier League. Hatteras was jubilant and awestruck as they congratulated their fellow teammate.

Hatteras took the lead with twenty minutes left to play in the game. They were fired up and felt it was their time to finally beat Manteo. Both teams were passionately pursuing each and every ball, looking to make a play. Manteo kept plugging away with combination play but could not seem to find their finishing touch.

With seven minutes left to play and Manteo down by a score of 3-2, a red card was issued to the Hurricanes left-back for improper language. He had held the Hatteras backline together all night but they would have to finish the game down a man and without him.

Three minutes after the red card, Manteo earned a throw-in deep in their final attacking third. Manteo sent nearly everyone into the box in an effort to equalize. Andrew Hayman gave a long throw into the six-yard box and Noah Goetsch flicked it up and into the middle of the box with his back-heel. The ball fell amidst a sea of bodies. Manteo’s center back, Yeifer Perez, was first to the ball and got off a shot that was blocked. The ball fell to the top of the six-yard box and this time it was Oscar Rivera who quickly fired off a one-touch shot that saw its way through all the bodies and into the back of the net. The Redskins rejoiced on their way back to the midline but then quickly reminded themselves that they came here for the win.

Three minutes remained on the clock and Manteo quickly won the ball back after the ensuing kick-off. At first, they seemed rushed, but then quickly realized that three minutes was still plenty of time to earn a quality possession and quality shot.

A Manteo throw-in was earned in the midfield and Hayman launched it into the middle of the field targeting his younger brother, Trent Hayman. Trent collected the ball amid a few Hatteras defenders and turned the ball back before squaring the ball into Calvio. Calvio initially turned back with the ball, drawing a defender away from goal. He then cut back into the middle and took a touch forward to the goal. The setup touch toward goal led to a shot from thirty-five yards out. He struck it low and hard with a nasty dip just before reaching the keeper. The ball bounced just under the diving goalkeeper, into the back of the net, giving Manteo the winning goal with only 1 minute and thirty seconds left on the clock.

The Manteo side breathed a sigh of relief and celebrated their comeback 4-3 victory.

Coach Cleaver stated after the game, “That was an exciting game to be a part of and both teams played with great passion. I thought overall we played really well. Our style of play was quality and the movements and combination play were what we have been working hard on. However, we had mental lapses that that cost us two goals in the first half and those mistakes breathed life into a dangerous team. Piece by piece, our players are learning and buying into the system and toughness that is required at this level. I am incredibly proud of our boys for believing in themselves, fighting hard until the very end and earning the comeback victory.”