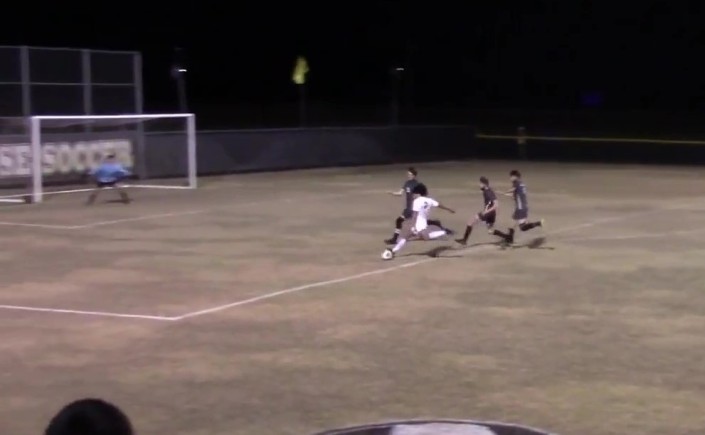 On Thursday, November, 11th, your Manteo Redskins traveled down to Clinton for a fourth-round showdown against the Darkhorses. Clinton has built itself into a 2A perennial powerhouse over the years that cultivated a longstanding rival with our own cross-town rivals, First Flight.

The stage was set and both schools did their part to create an electric atmosphere. Clinton’s Darkness Soccer Complex is top-notch, putting some college-level facilities to shame. Over 600 tickets were sold for the game, with nearly two hundred of those fans driving the four hours to support the Redskins. The large stands were filled to capacity and the standing room only applied as fans spilled out along the fence. As the national anthem finished playing, a firework display illuminated the sky and the roar of the crowd set the tone before the game even kicked off.

Clinton kicked off to an early possession as both teams looked to settle in and find their shape. Manteo earned the first shot of the game three minutes in after a long throw-in saw the ball knocked around the 18-yard box before a shot was taken by Justin Ortega-Santos. Ortega-Santos’ shot was placed high over the crossbar.

Six minutes into the game, Clinton saw their first threatening attack in which they pushed their attackers into the final third and put the Manteo defense under tremendous pressure. The Manteo backline was forced back into their own 18-yard box, dealing with an attack down the right flank. The ball was eventually driven into the six-yard box to be cleared out to the top of the box by Brian Estrada-Tovar. The ball was collected by Clinton’s #20. He faked a shot with his right to drag the ball over to his left. His left-footed shot was blocked but bounced over to Clinton’s #2, who did get off a clean shot but Weaver wrapped it up for an easy save.

Twelve minutes into the game, Manteo earned their best opportunity off of a build-up from a goal-kick. The ball was played out of the back to Alex Tovar on the right flank. Tovar played forward to Cristian De Leon Ventura. Under pressure, De Leon Ventura took his touch into central space before squaring the ball over to center-back, Eddie Turberville. Turberville kept the switch going and played down the left flank to Oscar Rivera. Rivera took off down the line with the ball, using his pace to beat his defender before whipping a lovely cross to the top of the six-yard box. Trent Hayman came crashing in with a man on his back and volleyed the cross with his left foot on his first touch. The volley was well struck but sailed just inches over the crossbar.

Midway through the first half, an unlucky break for Manteo changed the game. As Clinton built an attack, pushing the backline of Manteo to the top of the 18-yard box, Clinton’s #20 looked to slip a pass through the middle of Manteo’s backline. The pass was poor, on the ground, and was placed directly at Manteo’s center-back’s feet. The ball took an awkward bounce just in front of him and the pass slipped under his foot, making its way into the 18-yard box. Clinton’s #2 was there to quickly pounce on the mistake before the defense could correct it and he toe-poked the ball past Weaver to give the Darkhorse’s a 1-0 lead.

The remainder of the first half saw even play overall. Both teams stuck to their system of play, which is similar in many regards. Both teams earned several more shots but most all of them were driven high, over the crossbar. Manteo ended the first half with a counter-attack that saw Oscar Rivera put a low shot on target, but the Clinton goalkeeper swallowed it up by going to the ground.

The second continued on much like the first. Both teams worked tirelessly within their structure and saw opportunities arise from their efforts. Clinton’s most dangerous moments often came from set-pieces, corner kicks, or long throw-ins, in which they could target their big man, #20, in the box, allowing him to rise up and flick the ball on into dangerous areas. Manteo’s best attacks came from counter-attacks that utilized the pace of their attacking front three.

Six minutes into the second half, Manteo defended a long ball sent into the 18-yard box from a Clinton free-kick. Turberville headed the ball out of the box, finding the feet of Oscar Rivera. The Darkhorses had pushed numbers forward into the box and were stretched thin at the back. Rivera took off on the dribble down the left flank. A fifty-yard dribble up the pitch finally drew the attention of two Clinton defenders and as they closed on Rivera he laid the ball off to Aidan Braswell running through the left slot. Braswell received the ball in the top corner of the box and fired off a low shot, targeting the back post. It was well struck but inches wide.

Manteo continued to battle for everything in the midfield but did not earn many quality shots through much of the second half. The Darkhorses settled into a conservative defensive shape to protect their 1-0 lead, really only coming out of their shell when they earned a free-kick they could serve long into the 18-yard box.

The second half clocked wanned, drawing under 10 minutes of play. The Redskin fans urged their team to keep fighting and Manteo obliged.

With seven minutes left on the game clock, Clinton took a free-kick just inside their attacking half. They served up another long ball into the 18-yard box. Amyas Kenyon rose up in the crowded box to head the ball out. Oscar Rivera again collected the ball just outside of the 18 and took off another long dribble in the left slot. Ortega-Santos took off with Rivera as Braswell made a wide run down the left flank. Rivera dribbled into his attacking half, beat one defender with a skill move, pulled the ball back, and then played forward to Ortega-Santos in the middle. Ortega-Santos made a great first touch on the ball under pressure before playing a short diagonal pass out to Braswell who was now cutting in from his outside run. The pass was just slightly behind Braswell but he drug his left foot behind him to pull the ball back in front of him, setting up his right foot. He took a couple quick dribbles inside the 18-yard box to set his shot and then tucked the ball into the far post side netting.

The equalizer ignited the crowd, the Manteo bench, and players alike. Game on.

In the waning minute of regulation, Clinton saw probably their best chance of the game. Another free kick was awarded to the Darkhorses just on the outside corner of the 18-yard box. The player whipped in a quality cross that was won by a Manteo defender, but headed poorly towards the back post instead of up and out. A Darkhorse won the second ball and played the ball back across the goal to the far post. Another attacking Darkhorse was there for the second cross on the back post, all alone, but his swinging volley attempt missed the ball and it sailed inches wide of the post and out of play. The game was destined for overtime.

In the opening minutes of the first overtime period, Clinton earned a corner kick. A runner came short to receive the ball and he was defended quickly, forcing a poor ball into the box. The ball was cleared by Manteo, but poorly, as it fell to the top of the box to an awaiting Darkhorse attacker. He sliced the ball on the volley, connecting sweetly with it. The ball was bound for glory but Weaver produced a worldie of a save that saw a power dive all the way across the goal to parry the ball wide with one strong hand.

Four minutes into the first overtime period, Manteo took a goal-kick, sending the ball near the midline. The first ball was headed back by Clinton’s big #20 before Tovar headed the second ball back into the midfield. Damian Rivera used his body to shield his presser from the ball as he let it pass by him and into space in front of him. Rivera looked up as the ball settled to the ground. He spied his brother demanding an opporutnity on the ball, despite the three defenders around him. Damian sent the ball long with his left foot in search of Oscar. Two of the defenders turned their backs on the ball to keep pace with Oscar and the ball slightly deflected off one of their shoulders to fall to the feet of Oscar Rivera. Rivera took an explosive first touch to split the two defenders as the center-back came over to challenge him. Rivera drove the ball with his left foot, wrapping his foot around the ball, driving it low, and targeting the far post. The ball was always curling away from the keeper and had too much pace on it for the keeper to handle. The keeper went to the ground but the ball had already passed him, lacing the back of the net.

The stands erupted in a thunderous roar of excitement as Manteo celebrated the break away goal.

Manteo now boasted a 2-1 lead in the first ten-minute overtime period. The seconds ticked off the clock as Clinton was on the ball in the midfield with 9:45 left on the clock. A long ball was sent into the box and headed away by Estrada-Tovar only to be collected by a Darkhorse midfielder. The midfielder passed the ball over to Clinton’s #20 in the middle of the pitch. He touched the ball forward into a sliver of space with 9:57 on the clock. He drove a high line drive of a shot that beat Weaver as he elevated backward. The ball struck the bottom of the crossbar and bounced down, back into the six-yard box. Weaver got to his feet to locate the ball in the air as a Darkhorse attacker was there to head the ball in on the near post from three yards out. Weaver crashed into his goalpost in his effort to knock it wide. The home crowd went wild while the referee immediately ran over to his assistant referee on the sideline. They conversed, and the official ruled that the scoring player was in an offside position when #20 first struck the ball. The ten-minute game clock had expired, and the goal may have been 1-2 seconds late either way.

Understandably, there was much debate from the home side, while all three officials now converged to talk everything over. After several minutes, the teams were instructed to switch halves, and the second ten-minute overtime period was whistled underway with Manteo holding on to that 2-1 lead.

In the final ten minutes, Manteo kept a strong defensive shape and looked to clear any and everything they could to keep the ball away or to kill precious seconds off the clock. The Redskin defense held strong for the final ten minutes and the away fans rushed the field to celebrate with their team.

Your Manteo Redskins are moving on to the East Regional Finals!

Coach Cleaver stated after the game, “This was a great win for our program against a top-quality opponent. We knew going in that Clinton was well structured defensively and dangerous with set pieces and that we would need to be patient and stay true to our system no matter what. In the end, our players made a few big-time plays to ensure we won. As a team, we just keep fighting and pushing until the very end. The support of our community was amazing and certainly helped propel us to this tough victory.”